Aerotropolis and its core, the airport city , describe a new urban form that evolves around many major airports, which focuses on non-aeronautical economies, which generate already up to 60% of their total revenues. Office blocks, hotels, convention centres, medical facilities, free trade zones and even entertainment and theme parks are built in aertropolis to generate new sources of revenue for airport operators and turn the airport into a destination of its own right. The initial destination, the original city center and often eponym of the airport city, is the most important part of its periphery, which is in 8 out of the top 20 airports only 20km air line away and none of them is further away than 34km. Yet it is not the distance, but the transfer time from the airport city to the city center is the most relevant parameter. Except Amsterdam and Frankfurt, the fastest mode of transport is the car, but ever-increasing traffic jams make the car an unreliable partner. Public transport might be a bit slower but the transfer time can be almost guaranteed; yet discrepancies between the two modes can be huge. The most extreme ratio between public and private transport can be found in Jakarta, Los Angeles and Dallas, where the car is up to 4 times faster than public transport. To attract ever more people, airport cities have an increasing interest to be reachable from the old city center as fast as possible and start to invest in urban infrastructure. The reliability and increasing convenience of railways and people movers turn them into moving sidewalks that connect center with periphery. Once it was the city having an airport, today an airport has a city. 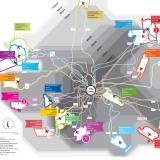