Accelerated through the fear from the attacks of 9/11 and all what followed, the so called ‘Western Society’ is constructing the greatest wall ever build on this planet. On different building sites on all five inhabitable continents, walls, fences and high-tech border surveillance are under construction in order to secure the citizens and their high quality of life within this system. The fall of the Berlin Wall was described as the historical moment that marks the demolition of world’s last barrier between nation states. Yet it took the European Union only six years to create with the Schengen Agreement in 1995 a new division only 80km offset to the east of Berlin. 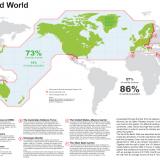